Not to long ago, we went out to test the new Can-Am Commander 1000 Side X Side at an area called Stoneman Lake near Flagstaff, AZ. We brought along a Polaris RZR4 and a Polaris RZRS to conduct our own Side X Side comparison (PUN intended). The riders for this test were Troy from UTV Off-Road Magazine, his Dad (also named Don), Michael and me. The Can-Am design team has made some major improvements raising the bar in the side by side market. Before we get into the test ride, here are a couple of thoughts on the look and feel of the Commander.

After unloading the vehicles from the trailer, I couldn't wait to sit in the pilot seat of the new Commander. Sliding into the seat was even better than it looked. The seats are extremely comfortable. They wrap around you on the sides with just the right amount of firmness and the seats are fully adjustable. As I scan the impressive dash I notice the steering wheel is adjustable up and down. The instrument panel is also attached to the steering wheel so it all moves together. I also notice there is a push button that says start. You insert the key and then push the button to start the vehicle. There are a few different keys that can be used which dictate top speed. So for example, your ridding buddy wants to test your new Commander so you give him the key that limits the top speed to 44 MPH. Another awesome improvement is the side netting. This is the easiest and safest netting I have used. The V~shaped locking seat belt style mechanism allows you to lock it in place with just one hand. To me this is huge. Another innovative feature was the water resistant storage compartment under the bed. We certainly tested this out as we rode in rain nearly all day and it was still dry by the end of our ride. Our 1st stop was at a rock garden. This is an area with large boulders and they were wet! I was in the RZR4 and went up the wall with no problem. I had Pit Bull Rocker tires installed which I'm sure helped with traction. Troy was next in the Commander. He didn't fare as well as the Visco Loc would not lock up. The tire in the air was spinning and when the one on the ground hooked up it, it threw the machine sideways off the rock. After a few attempts he made it. I just had to try out the Commander, so I hoped in and went to play. I tried several large boulders and had the same result as Troy. If you get up against a rock with a front tire and try to climb over, the front just will not lock up without making at least 10 revolutions. The Visco system does make them fast in most cases but one time I sat spinning the tire off the ground for about 5 second before it locked up which can be a bit frustrating. Next we headed to an old ranch house. We got there just in time as the heavens opened up and poured so hard you couldn't see the mountains around you. Next I lead the group off to a large canyon called Wet Beaver Canyon. It is about a 1,000 feet deep and literally comes out of nowhere. I was driving flat out on the very tight, twisty, and muddy slick roads and could barely see in front of me because it was raining so hard. Knowing the canyon was near by, my nerves were a little rattled. At one point I took off my goggles which was not a good move. My eyes are still red from the rain and mud. After the rain let up we headed off to a short jump. The Commander jumped and landed awesome. It was a blast taking turns jumping this machine. The landing was smooth, soft and controlled. 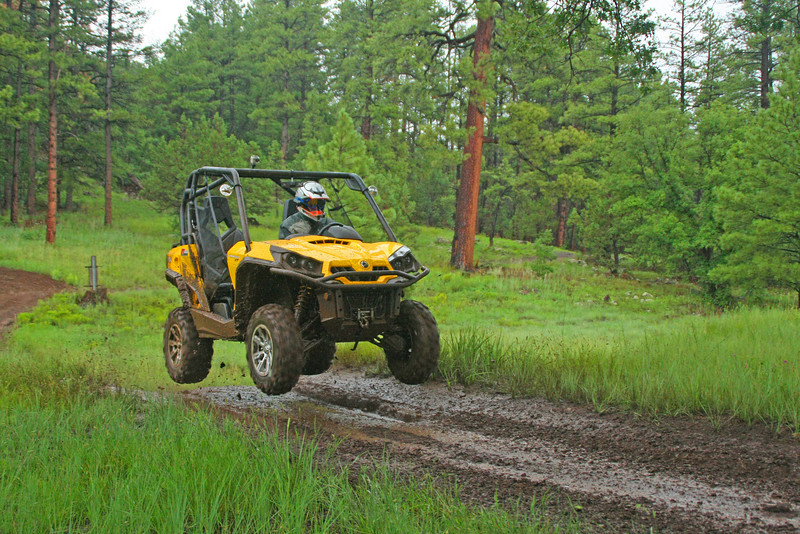 Along our way we did manage to toast a couple of Maxxis Bighorn tires. I put a hole in one while sliding sideways into a rock. We couldn't find the hole so we filled it with air and limped back to the main road where we then put the tire in a puddle of water. It was a sidewall puncture so we fixed it and headed back towards the truck. On our way back, with me riding shotgun and holding on for dear life, Troy managed to smash into a rock while drifting at full speed. It was a loud band as the tire went flat. We put in the remaining 5 plugs we had on us and made it back to the truck. I wanted to go climb the steep hills across the street from us before we left so Michael climbed in and we went for one more fun run. The 1st two steep climbs I made it to the top but thought it was a bit sluggish. That is when I realized it was in 2 wheel drive. So I hit 4 wheel drive and launched up the steepest part again and hit yet another rock at the top putting another hole in the tire. I think we had about 10 plugs in the sidewall for 1 trip! The RZR4 was by far the muddiest as the Pit Bull Rockers threw mud all over the interior every time it would turn. These tires gave excellent traction in all the different types of terrain. We were all covered from head to toe with mud Except Don (he had a windshield, roof and side doors) but we all had a huge smile from ear to ear. In short, awesome power and handling plus the most comfortable seats I have been in yet. It is way ahead of the pack on ergonomics as well. On flat ground the torque is unbelievable. It handles more like a trophy truck. As you are sliding out of the corners the front hooks up and straightens the vehicle up in a hurry for excellent control. The Visco Loc system in the Commander is still lacking but the machine is awesome. 98% of the people would not know about the Visco problem because they don't rock crawl often enough to notice.