The Laredo World Rally Team has proved that they can finish and put on a great show for the fans.

Ponce, Team owner, is proud to announce that him and his teammate Dave Gutwillig survived and finished the toughest offroad race on the planet, the King of the Hammers that has been held evey year since 2008.  WOW! Now we know why they call it the hammers! We felt like we were being hammered on from all sides for 12 hours, including internally. The whoops and train track desert bumps were just retarded and really hard on both the car and us. Fastest we went was 85mph (138kph) in the open flat lake section and we played it safe due to the high winds. The first lap was really sketchy in the desert sections due to all the dust in the morning. The Piñata buggie worked great on the rock sections and we went by fairly quickly unless if there was a traffic jam. The only problems we had were a blown valve stem from bumping into another stopped car, loose electrical connector, and bad gps visibility. We ran only four 37 inch stickies and no bead locks, and no communication radio. IRC helped us out with a tracking device just in case we broke down, we could be easily located. Congrats to all the teams that participated.  Stated Ponce and Dave.

Ponce starting of the race while Dave navigates his fabrication This unique team has tried the LCQ twice in the past and this time they returned as a guest star international team to participate in the main race. Ponce was unable to finish his race rig on time and ended up partnering up with Javiers Gulf Coast Crawl Shop and Dave Gutwillig. Javier Ibarra and his crew are tight and 110% pro, I have seen them race and knew they could help pull Team Mexico thru the finish, I am glad they accepted my offer, Gracias Amigos. I would like to especially thank Javier Ibarra for putting up his shop, tools, rv, tow rig, and trailer as well as Dave Gutwillig for prepping the Piñata Buggie to pass tech and survive the race. Daves fabrication is the best race buggie I have ever driven and it crawled and raced like a world class machine. Dave is an excellent desert racer and crawler, we both helped each other to keep cool and finish. I have raced and finished the WRC Mexico twice without any prior rally experience, but when compared to the King of the Hammers, which is a new type of motorsport that combines 120 miles (193kms) of the most brutal rock trails and open desert terrain known to man, KOH is way more challenging and has lived up to its name of being the toughest off road race on the planet Stated Ponce.

Ponce and Dave getting ready for takeoff into Planet KOH The team chose to run using a unique strategy that worked well, Ponce started and ended the race driving the desert sections and then switching off to navigational duties, while Dave Gutwillig (fabricator and owner of the Piñata buggie) raced the rock and other desert sections. Overall it was a great learning experience and they will be back next year with more Bongo to try and finish in the top 20. Dave and Ponce will be running 2 rigs in 2012 and will make sure to pre run next time at least 2 times and mount a large view GPS unit, along with radio communications. Recce is the key to be able to go fast. They both have also been signed on the new Dyno Max Off road Race Teams Program and are dealing with other new partners. Dave will be concentrating on racing the new Baja Texas Racing and Texas EDR Series. Ponce will head back in April to Norway to do some rally and Nordic off road racing. Ponce still remains the only driver in the world that has competed in the rock motorsports of rock crawling and rock racing since 2006 in Mexico, Venezuela, USA and Norway where he has learned new racing techniques to help him survive and finish 2 WRC events without any prior rally experience and now a KOH; his new addiction of desert rock racing has now begun. Dave also plans on doing more desert racing and has some new fabrication concepts that he will be adapting to race and crawl faster. Ponce and Dave at the finish 
The Team would also like to thank the following amigos who helped them thru out the race.

Once again Gracias and see you all soon! BONGO! BONGO! BONGO!
Laredo World Rally Team
www.MinorityRacer.com ®
The first and only team in the world racing rock and desert motorsports, plus rally!
WRT is offline
Quote Quick Reply
post #2 of (permalink) Old 09-02-2011, 11:54 AM Thread Starter
WRT
Novice

Join Date: Aug 2011
Location: Mexico * USA * Europe
Posts: 26
Thanks: 0
Thanked 1 Time in 1 Post
TEAM MEXICO #4472 logra llegar a la meta del KOH 2011
Here are some more pics that we found on the net. Waiting on some video and pics from our support crew from Black Sheep Club of Redding, CA 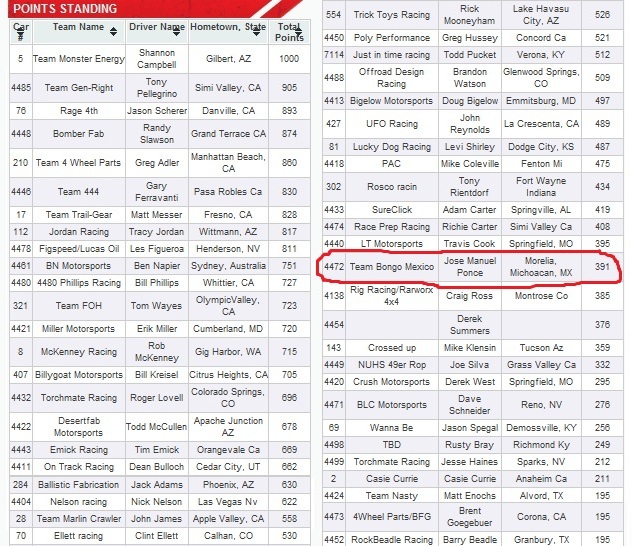 Statistics about the King of the Hammers 2011

Some interesting statistics about this year's KING OF THE HAMMERS 2011

Starters 1-24 did not advance on their starting position.
Dean Bulloch passed more people than anyone (76) to get to 20th place. Hussey passed the 2nd most (68) and didn't top 20. Shannon passed 61.
Ponce/Gutwillig TEAM MEXICO #4472 were the only team to start and end in the same position (spot #37.) Team Mexico had very limited resources which included only 4 good 37" Sticky tires, no beadlocks, no gps, and no radio communications gear to report back to their pit area. No prerunning was done.

The biggest cluster of DNFs was starting positions 12-23; Only 1 finished from that group and lost 24 positions.
Starting positions 64-95 had no top 20 finishers
Best finish by row goes to #18 Ferravanti (6) & Scherer (3), 2nd best was row #1 Adler (5) & Jordan (8)
14 rows both drivers didn't finish, 11 rows both drivers did finish
Rows 34 & 35 were the only subsequent rows to finish (Adams, Haines, Currie, Carter) but none of them finished in the top 20
Casie Currie barely made the cut off with only 1:39 min left before the cut off time of 9pm (you only get 14 hours to race). Casey started in 2 and ended up in 47th.
Brad Lovell started in 7th spot and did not finish, his brother Roger started 9th and finished 17th.

King of the Hammers 2011 International Guest Star Teams
Ponce and Gutwillig from Team Mexico, Fabio Manno from Italy, Ben Napier from Australia, Ragnar Robertsson from Iceland, and Curtis Warner from Canada, and 2 other teams from Germany and Ireland but they did not show or did not either pass the first tech. KOH has 2 techs.

Only 1 from the OG13, who could have also used alternate forms of entry
1 Sponsor Entry
5 from the Stampede
1 from the GrandSlam
3 LCQ'ers

Laredo World Rally Team
www.MinorityRacer.com ®
The first and only team in the world racing rock and desert motorsports, plus rally!
WRT is offline
Quote Quick Reply