We live in the deserts of Phoenix, Arizona where we only get about 7 inches of rain fall per year. Recently we had a HUGE rain storm so my buddy Jeff and I decided to go out for a ride and play in the normally dry, river beds.

We headed out North of Black Canyon City into the foothills of the Bradshaw Mountains. With all the rain we had yesterday the snow level also dropped to about 4,000 feet so the mountains all around us were covered. It was a little chilly when we started as my truck read the outside temperature at 38 degrees F. It did warm up throughout the day to the mid 70's.

My original plan was to take Jeff to the 70 foot waterfall back in the mountains but we had a change in plans as we hit the 1st water crossing. The water was flowing pretty heavily in this area so I changed course as we came to a fork in the road. As we always say if there is a fork in the road, take it. We headed up a steep hill to the tops of the ridgeline where we had some fantastic views. This trail goes up and down several mountains while crossing the stream in several places. We found some unbelievable sights along the trail. At one of the water crossings there was an outstanding pool of water with rock formations. As we explored this closer we noticed some caves on the left. Upon closer inspection there was a huge bee honey comb inside one of the holes. The other larger cave appeared to be used by Javelina as sleeping quarters. As we continue along up and down the ridgeline we came to a very rare sight. There was a huge Crowing Saguaro right beside the trail. I have been on this trail several times and never seen this. We know where several of these are, as many of you have seen from some of our other threads, but this one is by far the largest we have seen. The experts say this happens to 1 in 50,000 Saguaros. I would doubt there are that many as I only know of a handful and I would bet I have seen millions of Saguaros on our rides. At this point we came to a spot where Jeeps go along the creek and at some pointsm even in it. Keep in mind this is dry most of the year. What a ball rock crawling along the creek with water. Jeff and I both like playing on the rocks so it was a hoot taking turns going through one obstacle after the other. There were little waterfalls along the way as well. Some of the colors are incredible as we slowly crawl along. The rocks have very vivid colors consisting of blues, greens and reds. We did find some very good obstacles to play on that kept our attention as you get twisted up trying to go over and around some of the rock formations. 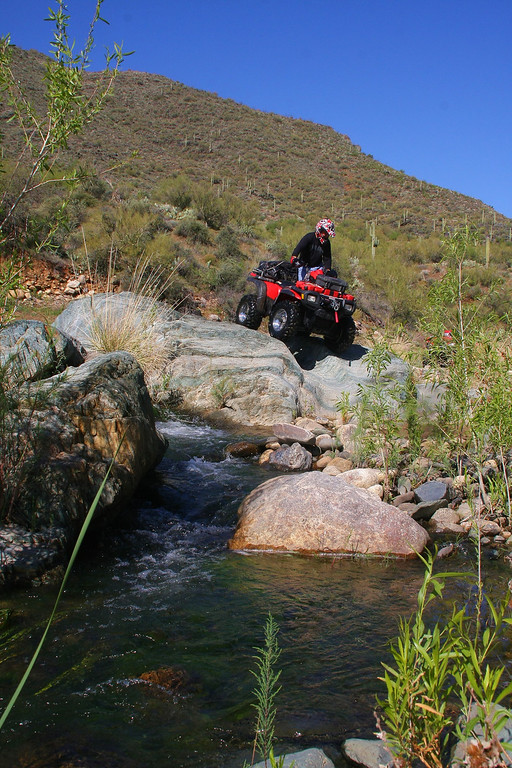 We came to a stop where the trail was in the water so we go for it. At one point Jeff decided it was getting too deep so he climbs out the side. I decided to go for it and nail it. I almost lost my quad in one hole but kept on the throttle and came out on top of a boulder high centered. How funny, it took me a minute of rocking to get myself free from the boulder. We had fun following each other taking turns leading as we made our way towards the final switchback out of the canyon. Just before we were at the end Jeff was following me through the creek when I turned around just in time to get photos of him getting sucked into a huge hole. He was in up over his seat on one side. After I was done laughing I went to help. We hooked a rope to my quad and I pulled him out easily. He just needed a little tug. We soon found out that he got water in his CVT as he could not get the clutch to engage. Unfortunately he has a giant skid plate (70 pounds) under the whole frame of his quad, so we could not get to his CVT drain. I said dont worry I can just pull you to the top of the hill and then it is downhill all the way to the trucks. Of course I wont take and photos I told him. Yea right My little Polaris just putted along pulling him up the steep rutted trail with ease. What a view from the top. The creek you see to the right is where we came from. We were several ridge tops over to the right.

From here he was able to keep it going as it was downhill and by the time we made it the 2 miles to the truck his clutch was starting to dry out.

What an awesome day spent out having fun in the great outdoors. Go out and create your own adventure soon.
Discount Tire is offline
Quote Quick Reply